‘Be The Next Bob’ Contest! 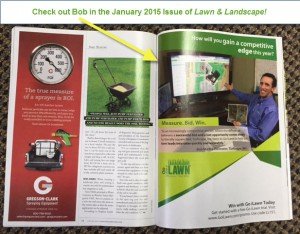 Flip to page 73 in Lawn and Landscape to see Bob’s ad! Click on this photo to enlarge.

Have you seen our new ads in Lawn & Landscape, Turf Magazine and Landscape Management? They feature Go iLawn user Bob Martin. Bob’s an estimator at Turfscape, Inc. and the new face of our ads.

Bob’s ads turned out so well it got us thinking about how great it would be to see more Go iLawn users measuring properties in their own environment- just like Bob. With that said, we invite you to send us your photos of you using Go iLawn for a chance to ‘Be the Next Bob’!

Here are Some Ideas for your Go iLawn Photos:

We’ll announce the winner(s) in March, but don’t worry- if your picture doesn’t appear in an ad, it will appear in an eBook we’ll compile with everyone’s entries. We’ll also share them on Twitter and Facebook. Simply fill out the form below to get started!